Again! I just posted about a few Super Bowl recipe ideas last weeek but we went to a playoff game party for the Chargers- Patriots game last weekend, and there are a few recipes worth sharing from that. And I know that there are people out there who are still undecided on their Superbowl Party menu!

I made a new recipe: Best Wurst Chicken Caliente Sandwiches. 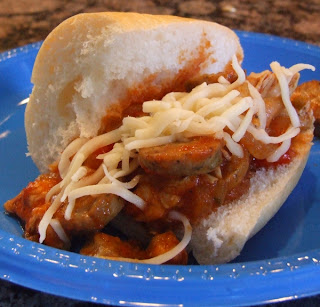 These are basically bratwurst, chicken, & peppers sauteed in a sweet sauce and topped with cheese. At some point in time I happened upon this recipe from the Heinz website. It was a winner in one of their big contests. Despite the bad recipe title, this was good stuff.

One party-goer brought two appetizers that were amazing. The first was a Mexican Cheesecake Dip. I have my own recipe for a cheesecake dip so I expected it to be the same. It wasn't. Served at room temperature, the texture of the Mexican Cheesecake Dip was lighter and completely addicting. None of us could stop eating it with those Fritos scooping dip chips. 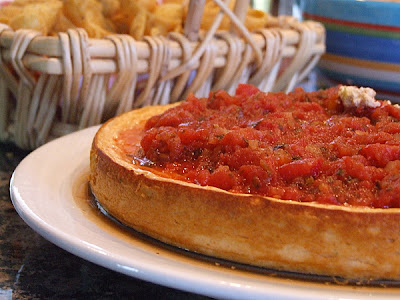 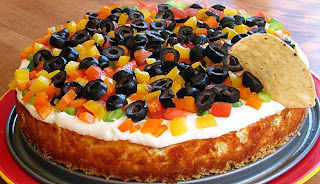 This is the Southwestern Cheesecake Dip that I usually make (served cold). It's very good. It feeds a ton of people. This dip is more cheesecake-like in terms of texture and it's best served with thicker chips or crackers.

The other recipe that we chowed down on was Blueberry Salsa. I realize that to some people this might sound a little strange. 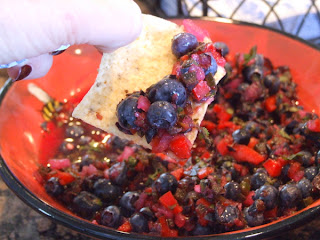 It's not. It was a nice variation from regular salsa (especially since we had salsa on the Mexican cheesecake) and it was a refreshing, light flavor to have amidst the other heavy menu items. It's a fruity salsa with a bit of a kick from jalapenos. It works. This time of year, Costco usually has tubs of blueberries at a pretty good price. Or, save this recipe to have at a summer barbecue!

For dessert, I went with the theme of the game and made a Boston Banana Cream Pie (to represent New England, of course). 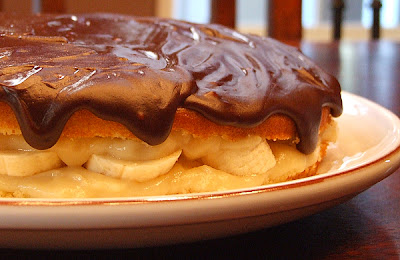 This was my first venture into a Boston Cream Pie (though it's really a cake). It was certainly pretty. It was delicious too. The recipe I followed made a homemade cake, but you could easily sub a yellow cake mix if you like that sort of thing. For the big game: New England vs. New York, it might be fun to have Boston Cream Pie and New York Cheesecake for your Superbowl Party desserts.

Have fun planning your menus!